If you’re wondering what pyometra in cats is and how to prevent pyometra in cats, this article should help you. I did this research to publish this information for anyone who may be inquiring about pyometra. I recently had to spay a young 9-month-old (very promising Queen) female due to open pyometra. This was my first experience with pyometra, and it caught me by surprise. I’ve since educated myself heavily on this topic. I’m more familiar now with the causes, the preventions, and the treatment plans for pyometra.

My Maiden girl (Wabi-Sabi) had barely turned the age of 9 months old and had TWO heat cycles when she developed open pyometra. She was taken to the veterinarian on the second day I noticed the vaginal discharge. Unfortunately, the incorrect protocol was suggested by the vet. Instead of the pyometra symptoms improving, they got worse. What started as Green/yellow discharge progressed into yellow infection, bloody discharge, lethargy and fever. This was a major cause for concern. It led me to the ultimate decision to spay her and rehome her as a forever pet.

Hopefully, this information will enable you to learn more about pyometra in the event you find yourself in a situation like this.

What is Pyometra in Cats?

Pyometra is the accumulation of pus within the uterus. This develops because of the hormonal, anatomical, and physiological changes that occur after a cat has gone through a heat cycle but does not become pregnant. Bacteria then take advantage of the situation, resulting in a potentially fatal infection.

During the estrus (heat) cycle, the progesterone level in the female cat increases causing the uterine lining to thicken in readiness for pregnancy. If mating does not occur the uterine lining becomes thickened preventing white blood cells from entering the uterus so that sperm can cause ovulation.

Pyometra is caused by the female cat having numerous heat cycles without being mated. Each time the Queen is having an estrus cycle, this risk for pyometra increases.

Due to the high level of progesterone in the uterus, the muscles in the wall of the uterus cannot contract easily to expel stored fluid and bacteria. As a result, this fluid becomes a breeding ground for bacteria from the vaginal flora which enters through the cervix (the doorway to the uterus).

If you notice any of these symptoms in your breeding Queen, take her in to be seen by a veterinarian.

Can pyometra be treated?

The most efficient method of treating pyometra is by performing Ovariohysterectomy or spaying; This is the surgical removal of the ovaries and uterus of the cat. If the cat that is suffering from pyometra is your breeding Queen, this could inevitably be the end of her career.

The other available method is the administration of Prostaglandins. These are hormones that reduce the progesterone level hence, enabling the contraction of the uterus. The opening of the cervix and allowing the pus and bacteria to flow out of the uterus. The success rate of the Prostaglandins has is not always consistent with success. A strong dose of antibiotics is also necessary to treat pyometra.

How to Prevent Pyometra in Cats

When your Queen is participating in a breeding program, you can possibly avoid pyometra by allowing her to mate on her third or fourth heat cycle. When cats are in their heat cycle, they need to mate three to four times within 24-hour for ovulation to take place. If cats aren’t mated within six days of estrus, the queen cat temporarily goes out of the heat.

If you’re a pet owner and haven’t had your female cat spayed by the age of 6 or 7 months old, then she is at risk for pyometra. Please make an appointment with your veterinarian to have her spayed.

Who is Most At Risk for Pyometra?

Typically, older intact female cats are at risk for developing pyometra. This doesn’t eliminate the risk of your female cat having pyometra. As I stated in my opening of this article, my maiden was only 8 months when she developed it. She ended her career as a breeder before it ever began.

I document every estrus cycle with my girls and take precautions to avoid pyometra. In my particular case with Wabi Sabi who developed this ugly infection at such a young age and after only 2 heats, I can say that there’s nothing I could have done differently to prevent this. Maybe she just wasn’t meant to produce kittens in her life. And that’s ok.

Things can happen to cats at any age at any time. It’s up to us to do what’s best for them. We ultimately make the decision for them to be happy and healthy, no matter what. <3

For Additional Information About Pyometra in cats, you can read this article.

Pyometra is usually a concern for breeders. To get more information and learn more about How to become a cat breeder, check out Cat Breeder Sensei. 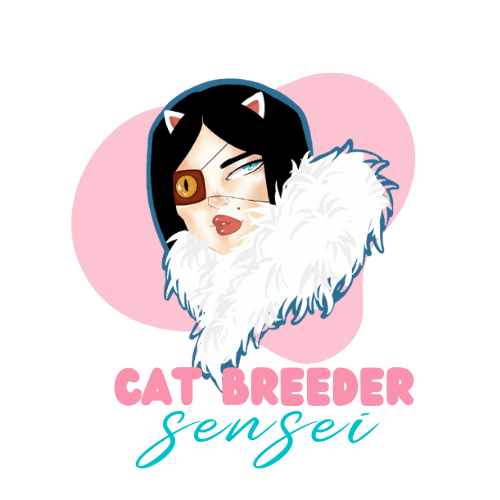